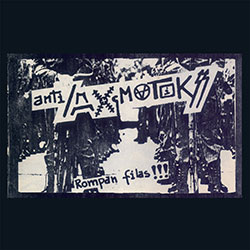 Before going on their Spanish mini-tour with the Dutch hard-core band BGK in November 1984, Anti/Dogmatikss made a first stop at the Marathon Studios in Barcelona, recording 11 songs that would turn into their first self-published cassette to be sold on that same tour.

The demo was titled “Rompan filas!!!” (Break Ranks!!!). Musically, the recording shows the evolution of the band towards a more hard-core sound, accelerated and furious, closer to the style of the Italians Wretched.

It included tracks like the now classic “Fuego en la Moncloa” (Fire at the Moncloa), “Piérdete!” (Get Lost), “Anti-U.S.A>> (a song by the band Epidemia with a guest chorus by Quoque from Kangrena), “Hacienda>>, <<Was a boy? (Who?)”. The tape came with an insert (a folded paper) with collages, song lyrics (some written by Joni D. and Cristian Dios from the band Dios), photos of the band and a manifesto (that we will include in this re-issue).

The demo was also sold outside Spain; this also helped to get their songs on a few international compilations. Tim Yohannan from the North American magazine Maximum Rocknroll, in the 1985 august number, graded the demo as a ‘pretty terrific debut’.

As an extra we’ve included 13 songs on the B side of the vinyl, recorded at Kangrenas’ practice place and at their practice place at Les Mosques St., most of them unedited recordings with different line ups.