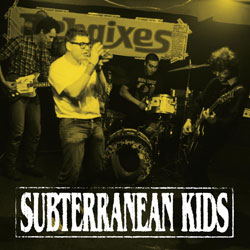 Subterranean Kids was the first spanish hardcore band ever. The first band that wanted to get further than the rest of punk bands at the time. They wanted to play faster, stronger and smarter than a whole generation of spanish punk bands that, as all punks worldwide, had a destructive, unintelectual, nihilist approach to protest against the system. In the heart of Barcelona, four guys who had been living along with their favourite punk bands like Ultimo Resorte, Shit SA, Kangrena or Attack, felt the impulse to make a step forward. They discovered american hardcore and bands like Minor Threat, Circle Jerks, DRI, Offendrs, Suicidal Tendencies, 7 Seconds, which had been born a few years ago but still hadn’t found a place in a country like Spain, delayed in cultural imputs because of a still reminiscent fascist political regime closed to foreign novelties. So, inspired by incipient hardcore american scene and tired of the dirtiness of punk, these four guys took their instruments and simply tried to play in a more powerful, aggressive, extreme way. That happened in 1985, and the starting point was a self-recorded, self-released demo tape called “Subterranean hardcore” which actually is the first spanish hardcore recording ever. The begginning of a story that, amongst others, this label BCore has took as a leif motif along the years and since a few years later of that turning point in spanish cultural history. After the release of the demo tape, Subterranean Kids started to do something that no other spanish band had ever done: touring Europe in an old van, playing in youth centers, squads and nasty clubs, hungry for experience and knowledge, far from the frontiers of a country that just frustrated them to the bones, pushing them into an insane playing style, singing and beating their gear every night like if that was their last night on earth. Their discography quickly had a follow-up in the 12 inch vinyl “Los ojos de la víctima” in 1986, and yet another one in 1988 called “Hasta el final”. These two mini-albums, along with the demotape, can be considered the foundation stone of a genre that, through the years, would see how a bunch of young bands discovered hardcore’s lifestyle and philosophy and applied it to their music. After that, the career of the band continued with an LP, “Ya no hay tiempo” (Overdirve, 1990), and shortly later they stopped playing for years. Until nowadays, when the band has decided to re-join and give their still privileged point of view of society in this modern world.
The demotape and the two EPs show how punk transformed into hardcore, and that’s the reason why we have put them together in this album that shows the first steps of an era and how they influenced many, BCore amongst them. The demotape has been remastered in exclusive and for the first time ever, and besides the two EPs contains an extra track fom “Los ojos de la víctima”. And, with a touch of digital modernity, we’ve put a link in the CD with a key to access six more songs to download from an internet site, that were split in compilations and singles, and also the complete lyrics of all their songs.
Let this be a homage to a band that not only was a musical entity in itself, but also a huge influence for a whole generation that made a step beyond punk. Without Subterranean Kids, BCore would have probably never existed. 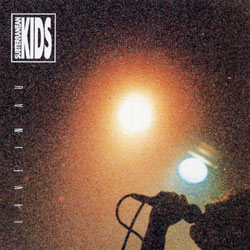