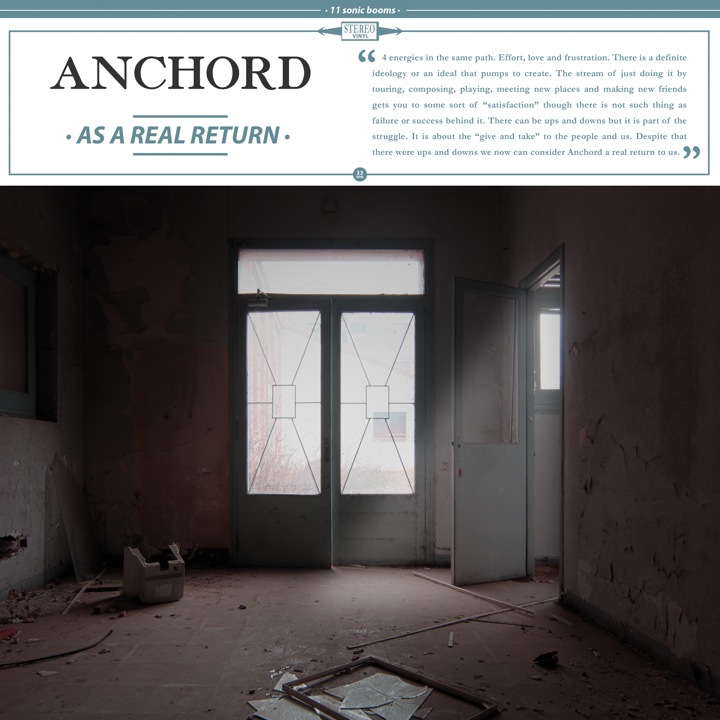 As a real return

The first time renowned producer Santi Garcia (head singer and guitarist of No More Lies and person responsible for the sound of most of BCore’s catalogue, as well as quite a few renowned Spanish and European punk/hardcore bands) saw Anchord live, it reminded him of the first time he saw Aina (flagship band of BCore and the Spanish independent scene in the nineties) performing: a special feeling that goes further than just watching four extremely young kids that know how to play; he saw a band with hardcore roots and a special performance and creativity that differentiated them clearly from others and that was, ultimately, contagious.

After over two years touring Catalonia, Spain and even Europe with their first songs, published by Saltamarges in 2014 on cassette, they are now ready to release their first LP, ‘As A Real Return’ (2017). If they already proved from the start that their composition game is hereditary of their love for nineties’ melodic hardcore and emo-core, this new album shows us how the band have gone straight down the path of genuine exploration with a one way ticket that starts at that station. It’s not a casualty: these last few years, and mainly in the American underground movement, a number of bands that clearly identify with the nineties hardcore scene have appeared, to ultimately define the current emo-core genre. And so, just like Aina did in Barcelona in the nineties –becoming a renowned local band that represent- ed the sound of Americans like Jawbox, Samian or Chavez in Spain and Europe-, Anchord and their own context would easily be included in the world of Title Fight, Touché Amoré or Into It Over It.

Even though their teenage love for melodic hardcore and venerated bands like A Wilhelm Scream, Beldevere or Adhesive is still there, the accelerated rhythms become more and more diluted in favour of a progressive opening towards more complex harmonies and rhythms, all without losing that touch of urgency so nec- essary in each song. A breath of fresh air that’s further justified by the fact they only had two or three songs ready, two weeks prior the recording date with Santi Garcia at the Ultramarino Costa Brava studio. The rest were created in just a few days in their rehearsal space in Sarrià de Ter (Gerona) –in the historic self-managed social centre Apaga La Tele, where they have grown up learning first hand about the DIY culture.