There are events that make you recover the faith in music as a creative thing; watching a band growing up in composition is something great, as it proves that behind the instruments there are human beings expressing themselves artistically. People that learn from themselves, being able to put their restlessness into music. “The Daily Charm” represented a big step forward for a band that used to play good songs and was starting to make true jewels with a sensitive charge not that easy to find elsewhere, even in a wide Europe which they have toured twice. Maple used to be a good band; then they became a magic combo, a band able to charm, to touch you there, that makes you relax and move you at the same time. Songs like caresses in your ear, that go through your ear-drum, stick into your brain and touch every nervous termination. And you know that’s so hard to get. And if the EP “Rebecca believes” was a fresh and full-of-life debut, the split “Oceane” a good beginning of self-knowledge and the 7″ “Schematic” a too-small recipient for such big songs, “The daily charm” is an absolutely brilliant record; the record that we’re sure Maple wanted. Maybe having reached all their goals made them took the decision so split-up, not before compiling all the single songs and rarities in “Another side of” (Underhill, 04). 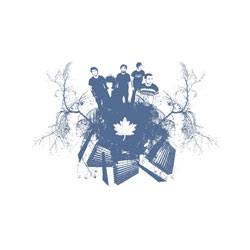